Home>Blog>Information>Beautiful Places to Visit in Pokhara

Pokhara is the most beautiful valley and the city of Nepal. It is the second largest valley in the hilly region of Nepal. It lies in the western part of Nepal. Pokhara is a piece of heaven in the world. There are many interesting and beautiful places to visit in Nepal, outside the Kathmandu valley. Among them, Pokhara is the most scenic and exciting valley in Nepal. Pokhara valley is the ‘Jewel of the Midwest’, second major tourist sport in Nepal but the favorite of tourist from around the globe. Pokhara lies 200 km west of Kathmandu six hours by car and 25 minutes by flight. It is very famous for its lakes and its and its location beneath the towering Annapurna massif.

Pokhara is very popular for adventure activities like trekking, paragliding, bungee, Zip flyer, City tour and many more. Pokhara is very rich in green hills, lakes, forest, waterfalls, terraced fields. Most of the people who go to visit Pokhara mostly stay at Lakeside because from the lakeside lovely views of mountains and lakes are visible and also the hotels of there are classy with the suitable environment. You can feel homely there. The peoples who live in Pokhara are called Pokhreli. In demographic terms, the Gurung people are the dominant ethnic group, with Brahmins, Newar, and Magar making up the rest of Pokhara’s population. Pokhara also has the highest number of Gurkha soldiers, as a majority of gun g and major ethnic groups join the British Army.
However, there are lots of beautiful places in Pokhara where nobody can wait to visit. Visiting those places in Pokhara makes you feel heavenly. Those places are described below;

Fewa lake is one of the beautiful lakes of Pokhara. It is also called Phewa Tal. It is a freshwater lake in Nepal, formally called Baidam Tal located in the Pokhara valley that includes Pokhara city. It is the biggest lake in Pokhara. It is famous for having a lot of domestic and international tourist who visit and sail, swim and fish on the Phewa lake. There is also a Tal Barahi Mandir (Hindu temple) on the center of the lake. If you want to go to that temple you must have to use the boat by paying some reasonable amount. Because of that temple boaters have to get employed which is the plus point of this lake.

It is a unique and beautiful waterfall of Pokhara. It is also called Patale Chhango in Nepali. It is an area that is known for its beauty. Devi ’s fall is seriously an amazing waterfall ever seen. This place is also responsible for the major attraction of tourist. Water coming from Phewa lake vanishes into the earth at the devil’s fall. Devi, a Swiss lady was swept away when the floodgates were accidentally opened. It is a popular landmark of Pokhara. It is also an attraction for tourist and local peoples. For the enjoyment and recreation of thousands of Nepali visits there. There is also an interesting pond called luck pond where visitors can try their luck on that pond by throwing and placing the coin on the statue of the god. Similarly, you can find a model of typical and traditional Nepali house and lots of statue of Nepali people wearing traditional dresses where visitors love to click photos.

Gupteswor cave is one of the beautiful and major attractions of Pokhara. In the nation of Nepal, it is considered one of the most amazing and longest caves. (Bhalu Dulo) is its oldest name . the inside part of the cave is made up of deposition of calcium carbonate which is dissolved from surrounding limestone. All the portraits and statues which can be seen inside the cave are very natural. For Hindu prayers, the occasion of Chaite Dashain and Mahashivaratri are the most important days to visit this cave. The species of bats inside the cave makes that places more attractive. As you reach the end of the cave you can finally see where Davis fall ends, the temporary staircase is there. To climb to the point where u see the slit in the center of that cave. The visit to this cave is really interesting.

This museum is also one of the major attraction of tourist. It is really a big museum which is constructed by covering 5.10 hectors of the land of Pokhara. This museum helps to reflects all the hidden story of Nepal. All the historic items of Nepal are kept in this museum. Every year in this museum around 7.5 thousand domestic and international tourist comes to visit. It records all the documents and exhibits the past and the present development of the country related to mountain and mountaineering around the world. There is a living museum outside the building and within the museum premises. because of this museum, lots of people visit Pokhara. As this museum reflects the culture of Nepal visitors becomes more excited to come here. This museum is a kind of best peace of Nepal. Don’t miss during your city tour in Pokhara for mountain information

This temple is one of the oldest temples in the Pokhara valley It has lots of cultural value. This temple is specially dedicated to goddess Bhagawati who is a popular deity. This temple was founded in the 17th century. This temple has great value for those people living in Pokhara. Many visitors came to this temple to enjoy pleasant picnics enjoying the amazing sites. The beautiful scene can be absorbed from this marvelous vantage point which looks out over the town of Pokhara. This temple quietly sits at some 3000 feet above sea level. It is located near the busy old bazaar of Pokhara. The beautiful white pagoda style temple of Bindya Basini is surrounded by park like setting. This is one of the most important temples for the Hindus of Nepal.

Sarangkot is a village just above Pokhara, known as a one-night destination. Here most of the people stop just to view the stunning sunrise over the Annapurna range and leave. Although people came here just for one day when they see the beauty of Sarangkot they want to stay more. Aside from chilling out and taking amazing views of both the mountains and Phewa lake. This place also helps to offer a beautiful glimpse into the peaceful and the lifestyles of villagers. In this place, there is a small temple called Shiva temple at the top of the mountain that acts as the hub of the celebration on important festivals days. Sarangkot is also famous because of the easiest and shortest hiking hills from Pokhara. The hills of this place are best for sunrise and mountain view. It is this best known beautiful village for its sunrise where on a clear day you can see the view of the Himalayas like Annapurna, Dhaulagiri, fishtail, as well as beautiful green hills, terraces of rice and the beautiful view of Pokhara valley.

World peace stupa is also known as Pokhara Shanti stupa. It is a Buddhist Pagoda Style monument on Anadu hill. This stupa is at the top of the hill. It is in the peace and lonely area.  The huge amount of people comes to visit this stupa by car or hiking after the finish of Phewa Lake boating. People do not feel any hesitation to climb on that big hill to visit that monument. This stupa is constructed in a unique design with white color which is eye catchy and attractive too. These peace pagodas were built as a symbol of peace in Japanese cities including Hiroshima and Nagasaki. As this monument is on the top of the hills, you can see the view of Phewa lake and Tal BArahi Mandir too. Standing on the Anadu hill, Shanti Stupa adds natural beauty to the valley. it is a perfect holiday place providing a clear view of ranges. It is one of the beautiful monument where every visitors becomes happy after visiting this monument.

This museum is just located at the north of Mahendra Paul, near the KI Singh Bridge, the Gurkha museum celebrates the achievements of the respected Gurkha. Gurkha museum helps to remind the labor and scarfies of Nepalese army during the time of world war. All the historical weapons are kept inside this museum which is an honor to see that. You will feel proud to see such weapons of our soldiers and kings which were used during the Ancient period. This museum also talks about the contribution of our great soldiers. Visiting this place definitely leaves your jaw dropped as you will witness the uniforms of Gurkha which is displayed in the museum. You will also get to see the bravery medal which they have won in the past.

This lake is the second largest lake among the Pokhara valley. This lake is a freshwater lake which is situated in the south-east of the valley. It resides at an altitude of 650 km. The surface area of the lake is 3.28 km, with an average depth of about 6.6 m. There is a number of the resort around the area of Begnas lake where most of the tourist spend their time. The area of Begnas lake is swampy so the water from the lake is used for irrigation and some parts of the lake are used as caged fisheries. The swampy areas of Begnas lake are converting into paddy fields gradually.

Tibetan Refugee Camp
This camp looks like a rural village having the small cottage and one story rows of tiny apartments which are scattered among trees beside a deep river gorge. If u will visit Tibetan Refugee Camp you will get lots of knowledge about Nepalese culture, especially of Buddhist culture. In the whole camp you will get to listen the melody voice of Buddhist singing . Buddhist sing in the memory of Buddha which is also their prayers. Tibetans living in Nepal are refugees and they do not have identification papers nor passport with them. Although they are the refugee they can live in Nepal freely as well as they can start their own business.

This cave is located near Pokhara, Kaski district close to the Seti river. It is the large limestone cave. As you can find the statue of Lord Shiva in the cave. It has helped to attract lots of tourist in the cave .this cave is named after the former king, Mahendra Bir Bikram Shah Dev. This cave was founded in the late 1950 ’s. Since then it has remained one of the most visited places in Pokhara. The corridors of the cave are completely dark as water drips continuously at the overhead of the greenery place. You also can see the view of grazing horses and mules in this area. As this cave is surrounded by full of greenery, visitors enjoy staying at that place longer than they decide.

The Seti river lies in the western part of Nepal. A left tributary of the Trisuli river. It rises from the base of Annapurna massif and flows south and south east Pokahra. Seti river is narrow in looking. The color of water of seti river is white like milk. You will also get to see the beautiful views of mountains from seti river. This river also offers you the chance of rafting. This river is a unique river which passes through two beautiful and contrasting scenic areas of Manaslu and Annapurna region.
In a nutshell, this is all about visiting places of Pokhara. Besides these places there are also more places to visit. Pokhara is really a beautiful place to visit.
[gravityform id=”8″ title=”false” description=”true” ajax=”true”] 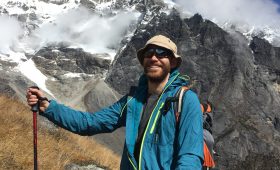 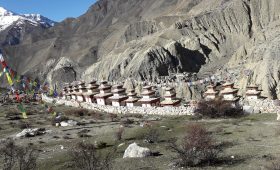