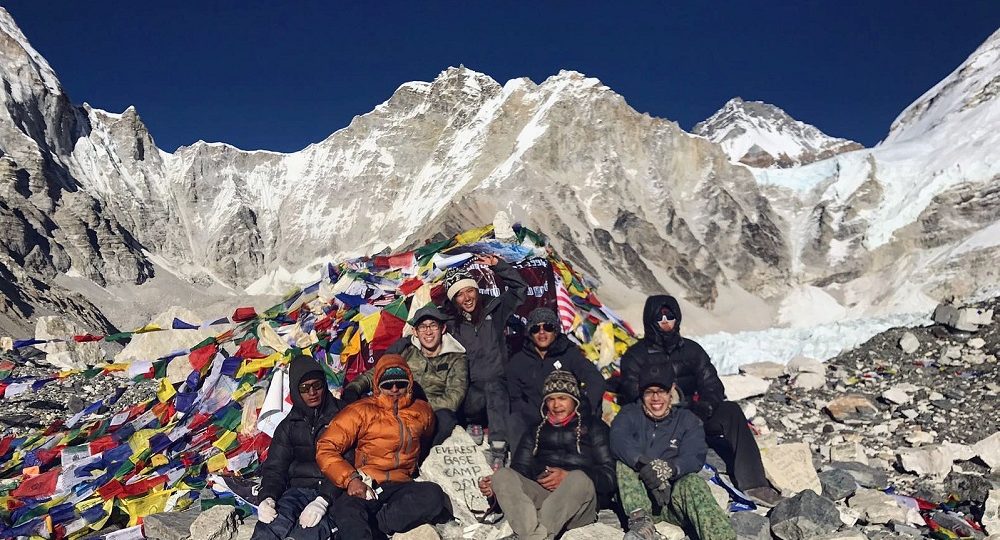 Where is Everest Base Camp Trek located?

Everest base camp trek located in the eastern part of Nepal between Nepal and Tibetan border. EBC lies in Sagarmatha zone and Solukhumbu district, Khumbu Pasanglhamu rural municipality.  EBC trek is the ultimate trekking trail for any adventure lovers. EBC trek lies in Sagarmatha national park which is one of the natural UNESCO listed sites of Nepal.

How Difficult Everest Base Camp Trek?

EBC trek is a bit difficult and adventure trek for average trekkers. Where Everest base camp is located at 5364 m and Kalapathar 5550 m above the sea level. Those who are physically and mentally fit they can do this trek easily.

How long will it take for Everest Base Camp Trek?

Everest base camp trek is minimum 11 days from Lukla to Lukla including extra 2-night accommodation in Namche Bazar and Dingboche. However, some people can do EBC trek to the maximum of 19 days. Length of EBC trek is depending on starting and ending point and through different passing trails. While you trek Gokyo Chola with EBC trek will take 15 days. While you do three passes with EBC trek will take 19 days.

What type of Physical fitness do I have for EBC Trekking?

First of all, you have to physically and mentally fitness is main important for the EBC trek. If you do your basic daily physical exercise it will help to do your EBC trek. Thousands of trekkers they successes to Everest base camp trek in every month.

What is The Best time to go to Everest Base Camp Trek?

Nepal has 4 major seasons. Season of Nepal is various from topography and altitudes. If you want to go EBC trek you have to go in the best season.

Four Season of Nepal are –

Spring – (March, April, May) is spring season in Nepal. This season is also known as best trekking season in Nepal. Temperature is hot in low in Terai part of Nepal and moderates in higher altitudes. Weather is crystal clear in this season where you can see the great Himalayas. Everything is changing in natural with everywhere greenery, the blossom of flowers. So spring is a season of natural beauty blossom of rhododendrons flowers around all trekking part.

Summer – ( June, July, August) is known as monsoon season in Nepal. Weather is quite hot. Someone of the days Lukla flight wouldn’t be flying on time due to the cloudy and monsoon.

Autumn – (September, October November) autumn season is one of the best and peak trekking season in Nepal. This is nice weather with Ariel mountains views. Nepal major festival Dashain, Tihar Teej falls in this season.

Winter – (December, January, February) – This is the cold season in Nepal. It’s a cold even good season for the trek. While we go higher pass its heavy snowfalls in the Himalayas.

The average temperature in Kathmandu during 4 seasons are-

What type of Food and Accommodation available during EBC Trekking?

Accommodations are the key point for any trekkers during EBC trek. Everest base camp trek offers budget to luxurious accommodation during the trail. Normally accommodation is various depending on your trek and types of cost of the package you booking.

What are the highlights of Everest Base Camp Trek?

Trek to the Everest base camp one of world tallest mountain.

Explore and enjoy with Sherpa people and their cultures, great Khumbu icefalls.

Amazing sunrise and sunset view of the great Himalayas of Everest region.

Why do I need guide and porter for EBC Trek?

Likewise, porters help to carry your baggage where you will enjoy more relaxation during the trek. Hiring guides and porters is also economically support to local people where people they get a job.

What should I bring during Everest Base Camp Trek?

While you are doing Everest base camp trek you should bring basic trekking equipment and gears.

Here are more details Sunrise Adventure Trek of EBC trek among them you should have a day to day equipment.

Is there any ATMs facility available during EBC trek?

How many Trekking trails in the Everest region and what are they?

The Everest Region has different trekking and mountaineering trails. Among them, the main trekking trails of Everest region are given below-

How is trekking trail condition during Everest Base Camp Trek?

Trekking trail is fine during EBC trek. All the trail except Lobuche to Everest Base Camp there may be trail can be changed somewhere a few meters because of glacier malted. Glaciers melts in winter somewhere can be overlap because of snowfall. But you have to take care of the trekking trail and when crossing suspension bridges. During donkey Jokpyo passing time at that time should give side in a safe place and have to take care of sleepy way and big steep place.

How long is the Lukla flight from Kathmandu?

Kathmandu to Lukla is 30 minutes flight from Kathmandu. Lukla t flight offers beautiful Himalaya landscape george any beautiful village. There is every daily flight from Kathmandu to Lukla and back to Kathmandu but during the summer season, there may not be a flight on time due to the monsoon and cloudy. During the summer season flight may be delayed and postpone for a few days which is normal. Even in other season flight may be delayed to Lukla due to the pressure of air traffic.

How did get Everest name and what are Nepali and Tibetan name?

In 1841, Sir George Everest, Surveyor General of India from 1830 to 1843, first recorded the location of Everest. It was subsequently named “Peak XV”. In 1865, it was renamed Mt. Everest to honor Sir George. Later in the 1960s, the Nepalese government gave an official name called Mount. Everest which is also known as Sagarmatha. Where Sagar means ocean and matha means top known as the top of the land known as Sagarmatha.

What is Everest Base Camp helicopter trek?

Everest Base Camp Trek is the same way go and back from Lukla. Those trekkers who don’t have enough time they do the trek from Lukla to Everest Base Camp and Kalapatthar then fly back to Kathmandu by Helicopter. Within the short time, you can have experience of helicopter and back to Kathmandu like sightseeing. In addition, any people can do Everest base camp helicopter day tour either in half day or can do EBC day helicopter tour.

What about the market in Lukla and Namche Bazar?

Lukla and Namche is the big shopping market in Everest Base Camp Trekking trail. Where you can enjoy meals in the nice restaurant, hotels, cafe shops, and a few banks and ATM.

What about the internet and battery charge during Everest base camp Trek?

For the battery charge, most of the place does not have electricity may be somewhere solar system. So the price the of mobile charge can be variable Rs100-Rs500 per full battery charge. and for the internet most of the place has internet, Lukla and Namche are good internet signal place and cheaper than other places. While you go more upper part price will be the higher then lower place. If you have the local sim card you can use the mobile internet if no problem mostly place has a connection.

How many hours do I need to walk for Everest Base camp trek?

Generally walking to Everest Base Camp Trek is about 4-6 hours per day. Likewise, it depends on your physical fitness, walking style and trekking trail like (steep up, flat, down). Next to walking speed depends on your previous experience of the trek.

What is the highest place of Everest Base Camp Trek?

How long is the Everest Base Camp Trek?

Who climbs first at the top of the Mount Everest and when?

New Zealand mountaineers Sir. Edmund Hillary and Nepalese Sherpa Tenzing Norgay Sherpa became the first climbers to summit the Mount Everest on Friday 29 May 1953. Before them, there was several groups try to summit Everest but couldn’t a success.

Do I need travel insurance for EBC trek?

What about altitude sickness during the EBC trek?

HAPE – High Altitude Pulmonary Edema – HAPE direct impact on lungs it’s fluid in the lungs which are dangerous for breathing.

What is the best time to do EBC trek?

What about meals and drinking water in EBC trek?

Nowadays there is available for different types of the food menu. Different places such as Lukla, Namche Hotel Everest view lots have inclusive of different meals such as continental, italic, Chinese, Nepali Indian. On the other hand regarding drinking water, you have to bring water purification tablets from Kathmandu. Next, there is available for safe drinking water in every hotel or you can also buy a bottle of water during trails.

Do you have more queries about Mout Everest  Click here