Manaslu Circuit Trek takes you to the amazing views of hidden beauties of Manaslu region. Trek to one of the remote areas of Nepal, around the worlds eight highest mountain, provides you unforgettable moments of your life. The mountain is also known as “Kutang” and lies at an altitude of 8163 m (26781ft.). The world Manaslu comes from a Sanskrit word “Manasa” which means “intellectual and the mountain of the spirit”. You can experience the unique culture of people living there with their customs, norms, and values. The wildlife creatures are really amazing in beautiful forests of pine, bamboo, and rhododendron. The region highly influenced by Tibetan culture provides you a great chance to explore traditions and beliefs followed by Tibetan people of Manaslu.

Manaslu was first climbed on May 9, 1956, by members of Japanese expedition, Toshio Imanishi and Gyalzen Norbu which was led by Aritsune Maki. Whereas, David Snellgrove undertook a seven-month sojourn of Midwest and central Nepal, followed the way via Bumtang and Buri Gandaki river crossing over the Larkya La. And again the next climb to the summit was made by another team of 11 men Japanese on May 17, 1971. Similarly, in 1972, 1973, 1974, the 1980s, 1990s, 200s, 2010s many expeditions were made by different groups or peoples of different countries.

Where is Mt. Manaslu located?

The eighth highest mountain in Nepalese world lies in the west-central part of Nepal is located in Gorkha district at about 64 km east of Annapurna massif. Here the trek provides your best moments with amazing views of mountains and green forests during the trail.

What can you get to observe during the trek?

Trekking to the area full of biological heritage and local culture provides you the great opportunity of exploring panoramic views of stunning mountains and daily living style of Tibetan people with their own different customs, rituals, and traditions. They speak their own language as Tibetan language and celebrate different traditions with different spiritual beliefs. The main ethnic groups are situated in Nubri and Tsum. Here you can also explore many ascetic monasteries as the region is Buddhists landmarked, influenced by Tibetan culture. Walking along the trail you also introduced with Mani walls which are made of rubble and stone, engraved with graceful Tibetan script on it. Now talking about the ecosystem of this region, you can found the unique floras and faunas. Which also includes many endangered animals like leopards, Asian Black Bear, Red Panda, Musk Deer etc. and 110 species of different beautiful birds like Kalij, Blood, Eurasian Griffon, Impeyan etc. in amazing Himalayan blue pine and rhododendron forests under the shadows of Ganesh Himal and Sringi ranges. Thus, trekking provides you many things to observe during the trek to Manaslu.

Where does the Manaslu circuit Trek start?

After arriving at Kathmandu, the next day we have to drive from Kathmandu to Arughat which takes about 8 hours. This takes you to the little town at the bank of Budi Gandaki, Arughat. And now the trek starts. Trek about 6 hours from Arughat to Seti Khola through beautiful Morder and Simre village. Then again from Seti Khola to Maccha Khola taking about 5 or 6 hours, exploring the views of the terraced field and amazing rhododendron forests is amazing. Trekking from Maccha Khola to Jagat provides you great chance to observe the hot spring comes on the way also known as “Tato Pani”. Trekking from Jagat to Deng for 7 hours, you can explore beautiful village of Philim lies next to the river Budi Gandaki with Japenese schools. Similarly trekking from Deng to Namrung, Namrung to Shyala, Shyala to Sama Gaon where Tibetan settled their hometown 500 years ago, Sama Gaon to Samdo, Samdo to Larkya Phedi, Larkya Phedi to La Pass, La Pass to Bhimthang, Bhimthang to Dharapani, and back to Jagat provides amazing moments of life exploring Buddhists monasteries with different floras and faunas of Manaslu region. And now return back from Jagat to Beshisahar, and then to the Kathmandu, attend the evening dinner and cultural show program provided by the company.

What about permits and regulations during Trek to Manaslu Circuit?

Government policies of Nepal declared some of the regions as the restricted region in the country. Trekking to such regions required special permits from the Government of Nepal. The region is very untouched and sacred from the outer world. The main objective of implementing permits is the special protection and preservation of historical monuments and monasteries. Permit to Manaslu Circuit is the expensive permit and from September to November, you have to pay US$ 90 per week per person and December to August US$ 75 per week per person or equivalent convertible foreign currency. The country is opening bordered and has connections with other countries like China and Tibet permit is strictly applied. Least two individuals are needed if not then one can issue two different permits. Similarly, the trekking routes like Tsum Valley, Lark Pass Valley, and Kanchenjunga, Upper Mustang etc. required permits. Here is restricted regions, individuals are not allowed. Thus, you have to find a reliable trekking agency to process the permits with another one individual.

Is it necessary to have a guide during the trek to Manaslu Circuit?

Manaslu Circuit Trek, sharing the border with China and Tibet must need the trekking staff i.e. guide or a porter with the tourist. According to Nepal immigration law at least one governmental authorized person is required to visit those restricted areas.

What about the accommodation and meals available during Manaslu Trek?

Sunrise Adventure Trek provides services as per the guest requirements. Here trekking to Round Manaslu includes lodge or guest house for accommodation with twin bed sharing room, if you are in a group and if you are a solo traveler, you have the private room and for meals, we have some options like continental foods, Italian, Indian and Chinese cuisine etc. Whereas, for drinking water, you can buy the mineral bottles or safe drinking water from the hotel either you can bring water tablets.

What is the best season for trekking to Manaslu Circuit?

Nepal contains mainly four seasons: summer, winter, autumn, and spring. Simply, foreigners don’t trek at monsoon because the time is very muddy, rainy with leeches and the most important thing it lacks the proper views of stunning Himalayas. The best time for trekking and attracting tourism in Nepal is autumn, summer, and spring as the weather is excellent and you get the magnificent views in this time. Trek to Manaslu Circuit provides you incredible views of landscapes in such seasons with moderate temperature and clear sky which include the months of March to November. The time also provides you the best scenarios filled with enchanting flowers. Summertime is also much many for Upper Mustang Trek than others region as it won’t rain much there.

How physical do I need to be for trekking and what about AMS?

The trekking is considered as difficult Though the trekking is comfortable, the reasonable level of fitness is required.  The walking hours for the trek is about 12 to 15 days, walking 5 to 7 hours each day. Trek leads you at an altitude of 5160 m.

Trekking by the way full of amazing natural streams springs, Himalayan views along with the exploration of endangered species in beautiful forests of blue pine and rhododendron provides you precious moments of your life. Trek to Manaslu leads you to the very preserved and highly influenced place of Tibetan settlements with their own different culture, custom, and traditions. You can get a great opportunity to closely observe the Tibetan lifestyles. Trekking to Manaslu Circuit with the services provided by Sunrise Adventure Trek guarantees you to provide the full enjoyment of natural glories with expertise.

Simple Trekking Facts highlighted you need to know about:

Seasons many: March to May and October to November 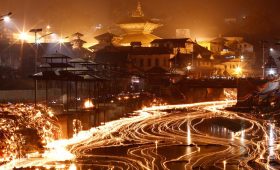 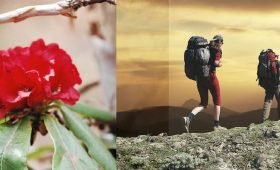 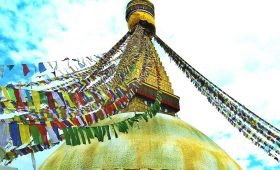 Best Places to Visit in Nepal