Nepal is one of the small but richest countries in the world in terms of biodiversity due to its unique geographical position and altitude variation. Nepal is the country of Mount Everest, the highest mountain peak in the world and the birthplace of Gautam Buddha- Lumbini. Similarly, Nepal possesses 8 of the 10 highest mountains in the world including Mt. Everest. Because of the presence of a fine blend of art, culture and tradition along with natural beauty, with varieties of beauty and pleasure to it is one of the world’s best places to explore.

Tourism, the act, and the process of spending time away from home in pursuit of recreation, relaxation, and pleasure while making use of the commercial provision of service. By the early 21st century, international tourism had become one of the world’s most important economic activities and its impact was becoming increasingly apparent from The Arctic to Antarctica. Similarly, tourism is the third-largest industry in Nepal and its largest source of foreign exchange and revenue.

Though the exact date and history of tourists are coming to Nepal are still unknown, it is believed that Tourism in Nepal started after the first successful ascent of Mt. Everest on 29th May 1953 by Tenzing Norgay and Sir Edmund Hillary. Before the unification of Nepal by late Prithivi Narayan Shah, tourism was closely related to religion, politics, and business. The only visitor from China, India, and Tibet visited Nepal for religious purposes. And due to the deliberate conservation policy of Rana rulers, Nepal remained virtually isolated and unknown to the outside world. During that period (1846-1950), Nepal was a forbidden land for foreigners except for the small traders and Indian pilgrims. After democracy came in 1955, foreigners were welcomed by Nepal Government by providing them a Tourist visa.

In 1956, under the supervision of French George Lebrec, National Planning Council on Tourism was set up and started to promote tourism and the same year National Tourist Development Board also came into existence. During 70’s Nepal became a safe tourism destination due to its perfect climate peaceful place and unique cultures. After going through many process and development the historical Peace treaty agreement between Maoist and Government in 2006 was the biggest achievement as a positive message about Nepal was relayed to the international tourists. In 2011, the Tourism Year was celebrated for the second time.

Tourism in Nepal has been seeing an increase in the number of visitors each year which only reflects the growth of this industry in Nepal. The popular tourist destinations in Nepal are, the capital of this place Kathmandu, the Kathmandu valley, Bhaktapur, Patan, Palpa, Chitwan, Janakpur, Pokhara, Ilam, Nagarkot, Annapurna region, Everest region, Langtang region and many more palaces whereas the birthplace of Siddhartha Gautama Buddha, Lumbini falls to south of Nepal and is one of the highlight of tourism in Nepal.

Similarly, there is a famous pilgrimage destination like; Pashupatinath, Muktinath, Swargadwari temple, Gosaikunda Lake, Halesi, Khaptad, Gadimai, Kankalini, Pathibhara, Baraha Kshetra, Budhasubba, Bishnupaduka, Dantakali, temples at Devghat, Manakamana temple which is in Gorkha district and more in Nepal. With 15 National & Wildlife Parks (two are UNESCO Heritage sites), Nepal is one of the last places on the earth you can spot the Asiatic rhinoceros and the Royal Bengal Tiger.

The tradition and famous hospitality of its many different groups are indeed a major part of what makes Nepal so special. From remote mountain villages to medieval hill-towns and the ancient cities of the Kathmandu valley, the people of Nepal are always welcoming. You can experience the strong and unique flavors of Nepalese cuisine, prepared with love and depth of flavor also you can join in and celebrate at once of the many festivals year-round. In fact, there is nowhere else in the world that can offer as many festivities as Nepal. Tourism is one of the mainstays of the Nepalese economy. For broad-minded individuals who value an experience that is authentic and mesmerizing, Nepal is the ideal destination.

Where is Mt. Everest Located in map? 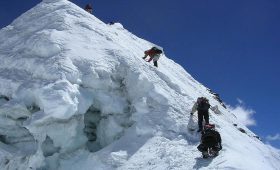