Home>Blog>Information>Trekking in Nepal after the earthquake!

Trekking in Nepal after the earthquake

The great disaster in Nepal:

Natural disasters which cause a great change in our life can happen at anywhere at any time. Same as happened to a small continent of the universe called Nepal. Being a small country naturally blessed with many adventures and beautiful environment, attracts many foreigners every year. But the great change due to one of the disasters, “earthquake” made many foreigners afraid of entering in Nepal. The devastating and heartbreaking earthquake in Nepal took thousands of Lives along with the economic, social and other major sectors of the country.

When did it happen and what losses are made by?

An earthquake happened on 25th April of 2015 at 11.56 Am according to standard time of Nepal made the life of Nepalese people very painful as about 9000 people were killed by an earthquake. Epicenter through the Gorkha made much destruction in Gorkha district of Nepal. Along with this, Nepal lost many social, cultural and historical monuments made by different ancient emperors of the country: Tribhuvan International Airport was immediately paused and later resumed, several temples made by Malla and Shah Kings (1069-1083) in Kathmandu Durbar Square and Dharara tower built in 1824 collapsed with many innocent peoples, similarly Manakamana temple in Gorkha district, northern side of Janaki Mandir in Janakpur, many temples of Kathmandu like Kasthamandap, pancthale temple, top levels of Basantapur  Durbar, Das Awatar Temple, Taleju Bhawani are destroyed and some parts of world Heritage sites like Pashupati Nath Temple, Boudanath Stupa, Shyambhunath Stupa, statue of Yog Narendra Malla in Patan, Taleju Temple, Mcchindranath Temple, different temples of Bhaktapur district designed by many ancient very skilled people were destroyed. Not only were these, many monuments of many different regions of Nepal destroyed with their identity and legendary history. According to various censuses, different economic industries lost their identity, many schools and colleges were destroyed. To look at the damage statistics 14 out of 75 districts, 3 out of 35 trekking routes, 1 out of 8 UNESCO World Heritage and 3 out of 18 national parks were affected badly. But despite the devastating earthquake, Nepali citizens are united together better than ever. And as always the foreign guests are more appreciated.

Loss of many people with very valuable monuments made the life of people very difficult. Where massive financial support is needed to Nepal as many people lost their shelter and stabled under the sky for all time without food and water. Meanwhile, reliefs and rescues are provided by many nations. People from many NGOs and INGOs came here and were provide the hospitable environment to the people. Now the destination is safe because of foreigner’s rescues and local’s unity.

Is it safe to travel now?

It is a Good News that after months of earthquake affected Nepal; it is now perfectly safe to travel here. Whatever the pieces of information that are spread all over the world are misguiding because of the poor journalism and other factors. The monuments are also in reconstruction state with good preservation. You can finely explore Nepal nowadays as many reconstructions are done. Sunrise Adventure Trek will take the responsibility of providing the great facilities and services during the treks and tours in Nepal with very well expertise.

Despite having such painful destruction in the country, the country still provides you amazing moments of your life by exploring spectacular views of the Himalayas, amazing wildlife, unique ethnic communities following their own different cultures, customs, and traditions. The legendary history of Nepal with the importance of their unique crafts and inventions never lets you make your expectations down exploring the country. 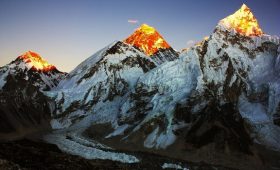 Where is Mount Everest Located? Nepal, India or China? 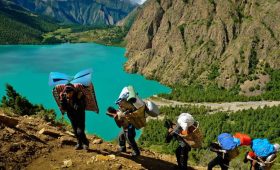 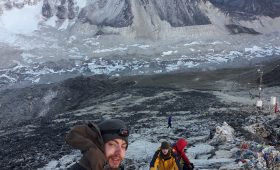