The highlight of the Bardia National Park Safari –

Bardiya National Park is one of the protected areas in the Terai region of Nepal. Bardia National Park Safari offers a chance to explore the amazing wilderness of endangered species. You can closely observe the living style of “Tharu” people, following their unique lifestyle and cultures.

Bardiya National Park Covers 968 sq. m of the area, it was established in 1969 as a Royal Hunting Reserve, then it was 368 sq. and later with the coverage of the whole Babai Valley, it was named Chitwan National Park. Chitwan National Park is 600 Km west of Kathmandu and in the mid-far western region in the eastern bank of Karnali River. In this national park, more than 30 different mammals, over 300 species. Likewise resident and migratory birds and many reptiles and fishes have been sharing it as their home. Sightseeing with beautiful scenery of Kathmandu free tour visiting an old heritage site in Kathmandu. Visit with durbar squares, stupas, and oldest temples. You can find religious tolerance between Hinduism and Buddhism in Nepal. You can also do Chitwan National Park Jungle safari which is a bit close to Kathmandu
Similarly, Bardiya National Park is the quietest and largest protected area of the Terai region. This national park is covered with the thick presence of Sal trees and grasses. Bardiya national park preserves some of the endangered species like rhinoceros, wild elephant. Besides that, you can see tigers swamp deer, crocodiles, Gangetic dolphins, and blackbucks.
Furthermore, you can enjoy the elephant ride, jungle walk, bird watching. Visit crocodile breeding center, going to the visitor center, etc are some of the activities we do in Bardiya Jungle Safari. Once you finish the trip finally you can join other trips as well.

You will be met by our representative and transfer to hotel and a short brief about the trekking after refreshment.

After Breakfast transfer to the Bardia National Park by air on reaching Welcome drinks and briefing about the programmes Visit to crocodile breeding center and tharu village. Jungle drive whole day with packed lunch.Overnight Resort.

Wake up call followed by tea or coffee. Breakfast, Whole day jungle walk with packed lunch, Walk to Rhino’s, Elephant’s and Tiger’s territory up to Gola, Dolphin Place. Come back to Resort. Overnight at Resort.

Kathmandu After breakfast back to Kathmandu by flight.

Transfer to international airport for your final flight departure 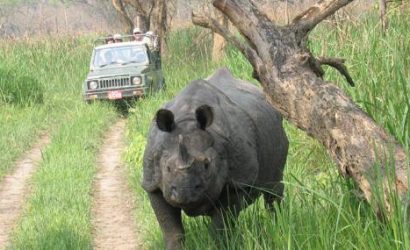