Highlight of the Great Himalayan Trails  –

Trip Summarize –
Stretching for 1,700 km along the length of Nepal, the Great Himalayan Trails will take you a mere 157 days to complete. You’ll see eight of the world’s 14 peaks over 8,000m, including Everest and other mountains in Nepal., Cross high passes reaching up to 6,000m, climbing a total of 150,000m. That’s a Snowdon every day for half a year. Oh, and it will set you back £20,500.
The GHT isn’t the world’s longest long-distance footpath. The Continental Divide Trail in the US is 5,000 km and Trans Canada will be three times that. But this steroidal version of the Pennine Way looks like being the most coveted of all. Eventually, the trail’s originators hope it will stretch from the mighty 8,000 m peak Nanga Parbat in Pakistan, considered the westernmost outlier of the Himalaya, to Namche Barwa in Tibet. It will connect five Asian countries – Bhutan, China, India, Nepal, and Pakistan.
That version will stretch for 4,500km, but there is no completion date confirmed for such a huge undertaking. For now, the focus is on Nepal – with the first guided treks starting next year. As well as being an enormous challenge, the GHT could also prove to be a welcome money-spinner for a country still recovering from 10 years of civil war. Some parts of Nepal have benefited hugely from tourism, like the Everest region and Annapurna regions. Those areas without such famous mountains, particularly in remote western Nepal, haven’t fared nearly so well.
Similarly, you can trek along a section of the Great Himalayan trekking passes through the Mugu district of western Nepal, a remote region peopled by Tibetan traders and animist tribes. Thousands of people were relying on aid from the World Food Programme, flown in by helicopter with the nearest roads a week’s walk away. Many young men leave to find work abroad. Tourism, for all its faults, could really make a difference here.
Likewise, several adventurous souls have traveled the arc of the Himalaya before, while Richard and Adrian Crane, cousins of television presenter Nicholas Crane, actually ran it in 1983. But the idea of a defined and designated route for trekkers is more recent. In 2006, the Dutch development agency SNV and the International Centre for Integrated Mountain Development based in Kathmandu committed to developing the idea, and have brought together government agencies and local people.
But it’s the hard work of one man, Australian trekker Robin Boustead, that has moved the project along most. After years of research (read his account here), he completed the trek in two sections and has drawn an excellent free map of the trail’s route as well as writing a guidebook. Every water source, camping ground, and elevation has been meticulously logged with GPS, but he says that the route will undoubtedly develop as more people do it and discover better alternatives.
For those without the time – or the knees – to do the whole thing in one goes, Boustead has broken the GHT down into nine sections, which you can pick off at your leisure. And if you think 20 grand is a lot of chapattis to spend on an adventure holiday, it’s still a lot less than the current price of a trip up Everest – and a lot more exclusive. There have been four thousand ascents of the world’s highest mountain, but only one man has done the GHT.  Nepal the Great Himalayan trekking is longest and difficult trekking routes. It takes 157 days to complete, it will break down in 30 days for for around 6 month treks.
However, Nepal launches Great Himalayan Trails  which is famous for adventure trek. We Sunrise Adventure trek will make your Nepal trip awesome. Nepal has officially opened the Great Himalayan Trail, one of the longest and highest trekking routes in the world, the tourism board said on Thursday.
Billed as the ultimate trek, the arduous hike over Nepal’s mighty Himalayas stretches from Taplejung in the shadow of the world’s third-highest peak, Mount Kanchenjunga, to Humla at the border with Tibet. Adventurers who complete the 1,050-mile trek will encounter a huge variety of cultures from the mainly Buddhist Tamang people of the central Langtang region to the ancient animist practices that mix with Hinduism in the far west.
It will take experienced trekkers around five months to complete, although it can also be broken down into smaller sections.
Nepal hosts thousands of trekkers and mountaineers annually. The country has eight of the world’s 14 peaks over 8,000 meters, including the world’s highest, Mount Everest, at 29,021 feet.
The Everest region offers several trails that range from 10-day to three-week packages. The Annapurna Circuit, Nepal’s most popular, is a 300-kilometer, three-week trek that rises to 17,768ft and passes through two river valleys. While you finish your trek finally drive back to Kathmandu.
Permits needed for the Great Himalayan Trails –
Special Trekking Permit for restricted/controlled areas
Trekkers’ Information Management System/TIMS Card
Conservation Area entrance fee
National Park entrance fees
Trekking peak climbing and mountaineering permit
Filming and documentary shooting permit

We organize trekking in Dhaulagiri region for any number of people. If the group consists of more than 16 pax, we will split the group and arrange accordingly. We will assign one trek leader, one assistant leader for the group of four pax and porters (one porter between two members ) to carry members luggage. This arrangement ensures that the group can still go ahead as scheduled itinerary despite any member gets sick on the way in the trekking.

Upper Mustang trekking is considered a moderate trek suitable for those who can hike for 6 – 8 hours a day. Obviously hiking in the high altitude will not be so easy rather physically more demanding, however our itinerary is scheduled for the proper acclimatization while gradually gaining the altitude in the trekking. It will be advisable to have some walking and hiking or other outdoor activities for more than two weeks which will contribute to comfortable accomplishment in reaching Upper Mustang. No technical skills or use of crampons are required for this trekking. It is highly recommended for the trekkers to consult with the doctors before coming for this trekking. Trekkers who have asthma, allergy or any other diseases related to hurt, lungs should take more precaution for this trekking.

Accommodation in Kathmandu will be arranged on twin sharing basis on BB plan except the extra cost for the single supplement (depending on the room availability ) according to the choice of the standard of the hotels before and after the trekking. Accommodation during the trekking will be arranged at standard teahouses/ lodges with unheated rooms with wooden beds and foam mattresses on twin sharing basis. The trekkers will have to share washing and toilet facilities. If the trekker is a solo traveler, he/she will have to share a room with the trekker of same sex.

Trekkers are provided three meals a day (breakfast, lunch and dinner) during Upper Mustang trekking. They can enjoy wide variety of food from typical Nepali food, to all types of international cuisine. Unlike other trekking companies, Sunrise AdventureTrek allows trekkers to choose the food from the menu at the hotel / lodges in the trek. When the group is too big for the hotels/ lodges to provide individual dishes, set menu will be arranged in most places. We use the lodges / hotels which serve hygienic, nutritious and good food for the trekkers for them to get enough energy for the hiking.

Any trekker can get altitude sickness while trekking in the high altitude despite strong physically fitness. What is important is giving enough time for the proper acclimatization for the trekking. Sunrise Adventure Trek has planned the itinerary with gradual altitude gain giving enough time for acclimatization for the trekkers. Hiking slowly specially in the high altitude help prevent AMS ( Acute Mountain Sickness ). If anyone feels dizzy, suffer palpitation or severe headaches and loss of appetite, he / she will be moved to the lower altitude immediately or arrange the helicopter rescue in the severe case of AMS and the client has to pay for it.

A variety of clothing is necessary for the Upper Mustang trek. While choosing the equipment trekkers need give emphasis on two simple aspects: Lightweight and Functional. The items should be lightweight, dependable, and adaptable to a variety of extreme weather conditions. The quality of the trekking equipment you choose has a lot to do with how warm, dry, and safe you will remain. For this reason you have to be critical of quality and the proper fit of clothing.

– Down Sleeping bag
– Trekking bag / Duffle bag ( to carry for the porter )
– Day pack ( to carry with the trekkers to put the things required during the day time )
– Large plastic bags ( to keep items dry inside the trekking bag )
– Water bottle
– Head lamp with spare bulb and batteries
– Trekking poles
– Personal medicine box
– Sunglasses with UV protection.
– Books, dairy, pen, walkman and any other game instruments

All our trek leaders are well experienced who have led trekking in Dhaulagiri region for more than eight years. Their in-depth knowledge about culture, custom, the geological surroundings as well as their professionalism, sincerity, and their hospitality make your dream of successful trek a enjoyable, memorable event in your life. Although our trek leaders are not highly educated, they are well experienced, professionally trained and posses good leadership skills to operate the trip smoothly. Their smiling faces, loving and caring attitude will make your even a hard walking day a pleasant one. All trekking staff of Sunrise Adventure Trek are locally employed and have the adequate knowledge about culture, ecosystem, flora, fauna, geography, history and the safety measures in running the trips. Their attitude and the efforts will be always concentrated on the less impact of the trekkers to the local culture, custom, nature and the eco system.

We are strongly committed to the porters rights. We make sure that they are well paid and have the proper clothing, foot ware and shelter. We are aware that no porter should be asked to carry a load that is too heavy for their physical abilities and the weight limit should be adjusted for altitude, weather and trail condition. We request our members not to have more than 15 kg weight of luggage to give to the porters. Porters who become sick while in the trekking are treated with high priority just like the other trekking staff or the members. If needed helicopter is sent and rescued in case of sever condition of sickness or accident. All porters are insured for sickness and accident.

Nepal, as a tourist destination is good for all seasons, however, the best seasons for trekking to Dhaulagiri region are Spring (March – May) and Autumn (mid Sept. – mid Dec. ). Trekking in autumn season is noted for clear weather and excellent views of silvery mountains against blue sky. It gets colder towards the end of December. This trek can be done in any month except January and February. 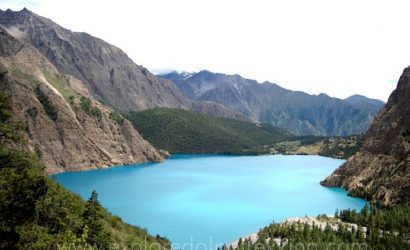 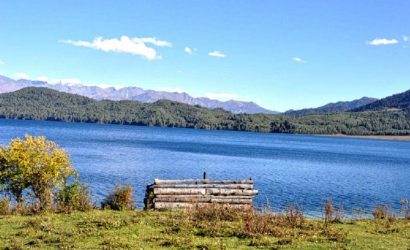 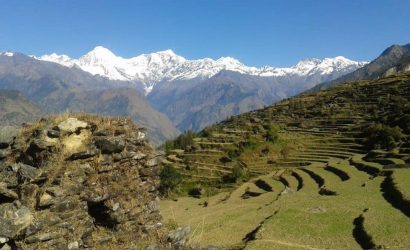 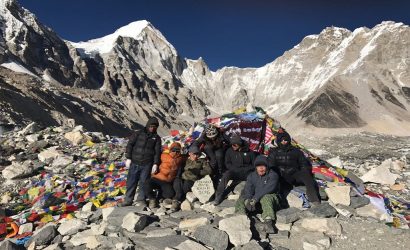 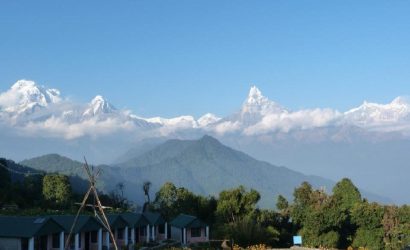 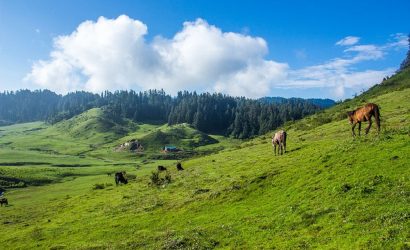